written for CABAL journal, no. 1 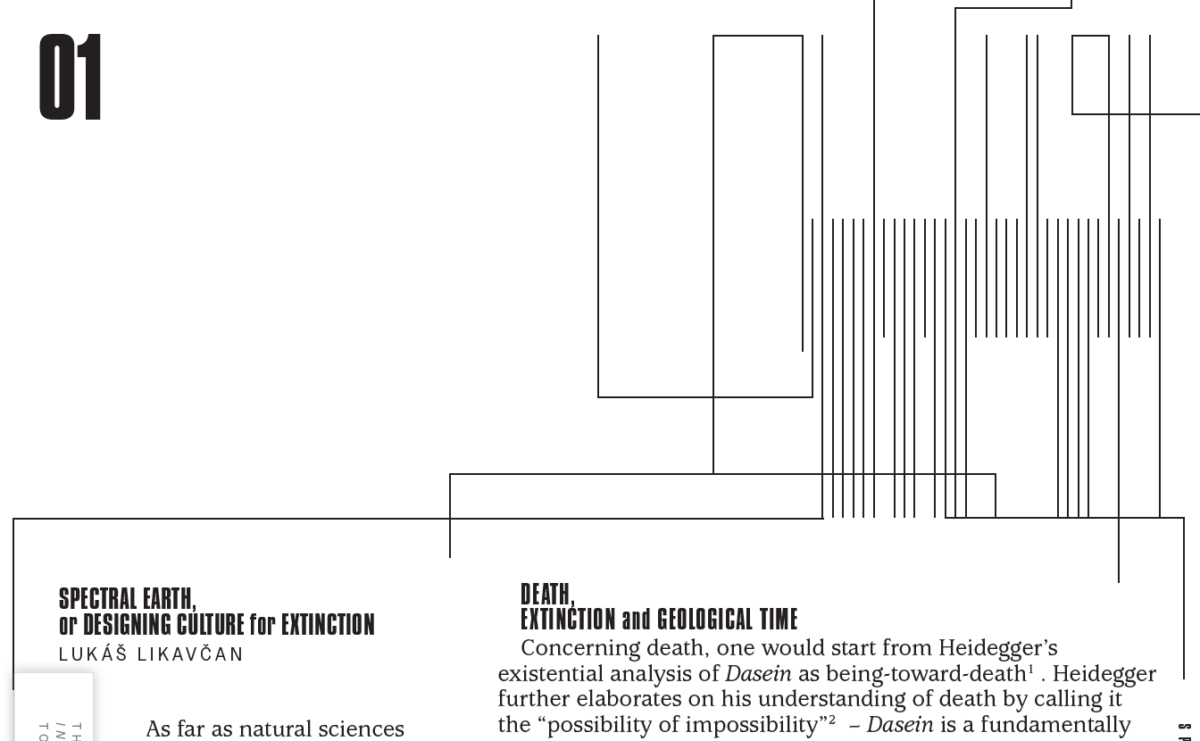 This essay elaborates on a closing argument of the author’s upcoming book Introduction to Comparative Planetology (Strelka Press, 2019).

As far as natural sciences tell us, every known biological species comes with an expiration date. In this respect, homo sapiens sapiens is no exception. The problem is thus not so much about whether we will become extinct, but how we will cope with the truth of that extinction, as well as the ongoing extinction of other species. Without jumping on the bandwagon around the Extinction Rebellion movement and its tactics of civil disobedience, I believe that the notion of extinction brings vital conceptual relevance to design tactics to be adopted in our present situation of environmental emergency. In particular, one might construct the concept of extinction as a species-level analogy to individual death and develop certain conclusions regarding the constitutive role of extinction in the apprehension of geological time and planetary scale. Such a perspective might be tightly connected to the construction of a tentative framework of species-being, and it certainly necessitates unorthodox cultural and design interventions.

Concerning death, one would start from Heidegger’s existential analysis of Dasein as being-toward-death.@@1 Heidegger further elaborates on his understanding of death by calling it the “possibility of impossibility”@@2 – Dasein is a fundamentally finite, constrained form of being, and constitutes itself through the grasping of the truth of its end. However, once we move from Heidegger to Emmanuel Levinas, we observe a peculiar reversal of relation between the modalities originally invoked by Heidegger – death is rather “an impossibility of possibility”, i.e. it circumscribes a radical alterity to some great outdoors, where the very notion of possibility becomes meaningless.@@3 This conceptual rotation allows Levinas to secure existence of infinite, inhuman time, which precedes the existence of an individual human being, and which extends beyond the scope of one’s life.

In this essay, I would like to reinterpret this inhuman temporal modality as “geological time”. This temporal modality can be broken down into its two essential moments – ancestrality and posteriority. The former term comes from the philosophical vocabulary of Quentin Meillassoux, and is defined as “any reality anterior to the emergence of the human species.”@@4 What is important about ancestrality is that it precedes, properly speaking, an emergence of thinking itself – thus ancestral realities are anterior to their givenness to humans.@@5 They cannot, therefore, be simple correlates of thought – they are fundamentally misaligned with human thinking.

The mirror concept to ancestrality is posteriority: the time after the end of the human species, and thus also the time after the end of thought as we know it. According to Jean-François Lyotard’s notes on solar death, this temporal situation cannot be meaningfully conceived by humans.@@6 However, since Meillassoux claims that sciences confront us with ancestral statements, such as in the cases of archaeology or geology (e.g. a proposition that “Trilobites were species of marine organisms that disappeared 252 million years ago”) we can say that conversely – if it holds that posteriority is a futural mirror moment of ancestrality – a statement such as “In 5 billion years, the Sun will turn into a red giant” actually provides us with cognitive access to a time after our own extinction, i.e. after the end of thinking.

Some even say that we are already living our extinction: Spanish philosopher Marina Garcés theorizes about the so-called conditio postuma. Instead of speaking about the post-human, she prefers to talk about the posthumous condition:

“Our ‘post’ is that which comes after the after: a posthumous post, a time of deferment we give ourselves when we have conceived and in part accepted the real possibility of our own end (whether of our world or the end of the human species as such).”@@7

Such a condition might be assessed by some as a reason for pessimism and defeatism. Yet this would be misleading, since there is no reason to associate human centrality and importance in the planetary assemblage with hope and optimism, or the de-centring of the human with nostalgia, melancholy, and defeat. On the contrary, conditio posthuma brings about the possibility of living with the truth of extinction, i.e. living with the spectre of the future death of our species. As also noted by Ray Brassier, Lyotard – similarly to Garcés – claims with respect to solar death (i.e. to the future consumption of the Earth by the Sun extending its diameter beyond Mars’ orbit after it exhausts its hydrogen reserves) that: “Everything is dead already.”@@8 And so, just as “the solar catastrophe needs to be grasped as something that has already happened,”@@9 the concept of geological time invites us to maintain our extinction as a constitutive horizon of our planetary inhabitation, as if it has already happened.