It seems Kojima is the director of the game called reality 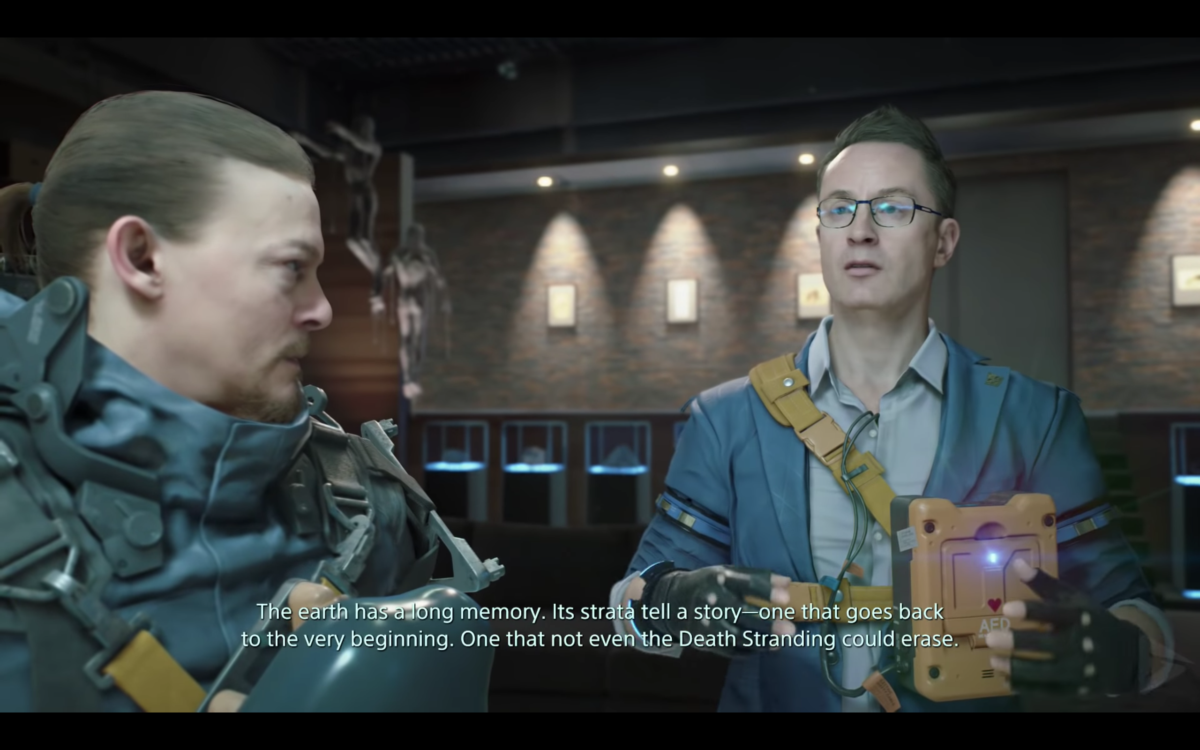 Leonardo Dellanoce: In November 2019, Sony and Kojima Productions released one of the most awaited, mysterious and immediately iconic games of recent times, Death Stranding. Since the first promotional materials and rumours had begun circulating, it had been clear that Death Stranding was a different kind of video game: something to do with packages, the end of the world, Guillermo del Toro, rain and fetuses in jars. The fact that it was being created by Hideo Kojima, one of the few star directors in a $152 billion industry, only added to the hype and expectations of an already star-studded game, featuring actors and movie directors including Mads Mikkelsen, Norman Reedus, Léa Seydoux, Nicolas Winding Refn and del Toro.

The game is one of the few examples of a single director’s artistic vision scaled up to a triple-A product – quite an anomaly for the industry. Kojima took all his artistic independence and reputation to create a world in which you are literally a delivery guy, Sam “Porter” Bridges, solitarily cruising a post-disaster landscape haunted by spectres of extinction and single-handedly reconnecting US cities by delivering supply packages and plugging the cities to a fictional “internet” network.

While on this journey, the protagonist meets a number of peculiar characters, including Heartman, played by Nicolas Winding Refn. Heartman could be seen as a twist on the classic “mad scientist” figure; he self-induces temporary cardiac arrests every 21 minutes so he can investigate the world in between life and death. At the same time, he is the vehicle through which Kojima works out the planetary-scaled events of the Death Stranding world, creating a “parascientific” framework that directly connects to our reality. Heartman – together with a small network of other experts – is studying the “Death Stranding”, a mysterious and catastrophic event that took place before the events represented in the game and which has caused the worlds of life and death to connect. Humans are still grappling with the aftermath of this event, which provides the backdrop to the game’s main storyline.

In terms of storytelling, the game’s narrative about the Death Stranding is convincingly linked to the longer line of mass extinctions that the Earth has witnessed during its 4.6 billion years of existence. You are racing against the extinction of humankind, with the disastrous traces of the unfolding sixth mass extinction everywhere and the looming presence of the Last Stranding, imagined as the tipping point of the extinction. This scenario does not seem to be too dissimilar to our current predicament, given the climate emergency, the evidence of past extinction events and the ongoing one.

Lukáš Likavčan: Yes, it is Heartman who formulates the evidence for past extinctions when he says that – literally – “the Earth has a long memory,” and that “its strata tell a story, one which goes to the very beginning” of life on Earth; he continues: “the past informs the present and aids us in building the future.” What we have here is a long memory of the Earth hidden in its geological layers, telling us the story not just of what happened, but also how we can potentially survive our own predicament. There’s actually a long tradition of thinking about deep, geological time, to which Heartman is referring. This includes different philosophical notions of temporality, which are not exactly centred around our human perception of time or history. One of them is Quentin Meillassoux’s concept of “ancestrality”, which points towards the time preceding the emergence of the human mind. Beyond human history, constructed through the prism of culture, politics, society, et cetera, there is a sort of absolute, external history, one that moves at the pace of tectonic plates. This slow, long history, is exactly what is recorded in the geological memory of the Earth.

This also leads to the discussions of how we can access the memory of the Earth through digital-media technologies. Digital media can bear witness to events beyond the scale of our perception and sense of time, making tangible a new layer of planetary sensorium. What starts with global satellite systems and weather-sensor networks ends with ubiquitous computation preparing the ground for the emergence of new cultural genres – such as video games – that help us forge bonds with the “Planetary”: the inhuman realm of the metabolic processes and torrential force fields that our planet essentially is. These genres can also aid in understanding the ancestral past, preceding our individual or collective species history. In the game, the past bubbles up through the medium of “tar”, which sounds like Kojima’s allusion to fossil fuels – the past made liquid. From the tar, monsters emerge with animal and human forms, extinct creatures that were once alive. This omnipresence of spectres reminds me of some other aspects of Meillassoux’s work, highlighted recently also by Ben Woodard, in which spectres are defined as those who passed away, but were not properly mourned. The appearance of the ghost constantly reminds us of some unfulfilled work of mourning, the mourning to be done. In relation to the sixth mass extinction – both as a real-world event and as the context of the game’s narrative – we can then think of how to envision collective mourning of the spectres of all the extinct species, as a sort of reckoning with the haunting possibility of the “Spectral Earth”: the planet as predominantly populated by ghosts.

This is one of five models I envision in my recent book Introduction to Comparative Planetology (Strelka Press, 2019), and it brings a peculiar political and design strategy: being able to navigate our interventions on the surface of the Earth with this constant thinking about all the extinctions that happened and all those that can potentially happen, exactly in order to prevent them. Such an approach produces its own kinds of visual cultures: Death Stranding is the case for the 21st century, but this approach was here in the past, too. When scientists in the 19th century became acutely aware what fossils meant – traces of past extinction in many cases – they speculated about the future extinction of humankind. Take the example of Henri De la Beche’s “Professor Ichtyosaurus”, who educates his lizard companions in the cartoon Awful Changes from 1830 about the unfortunate destiny of Homo sapiens.