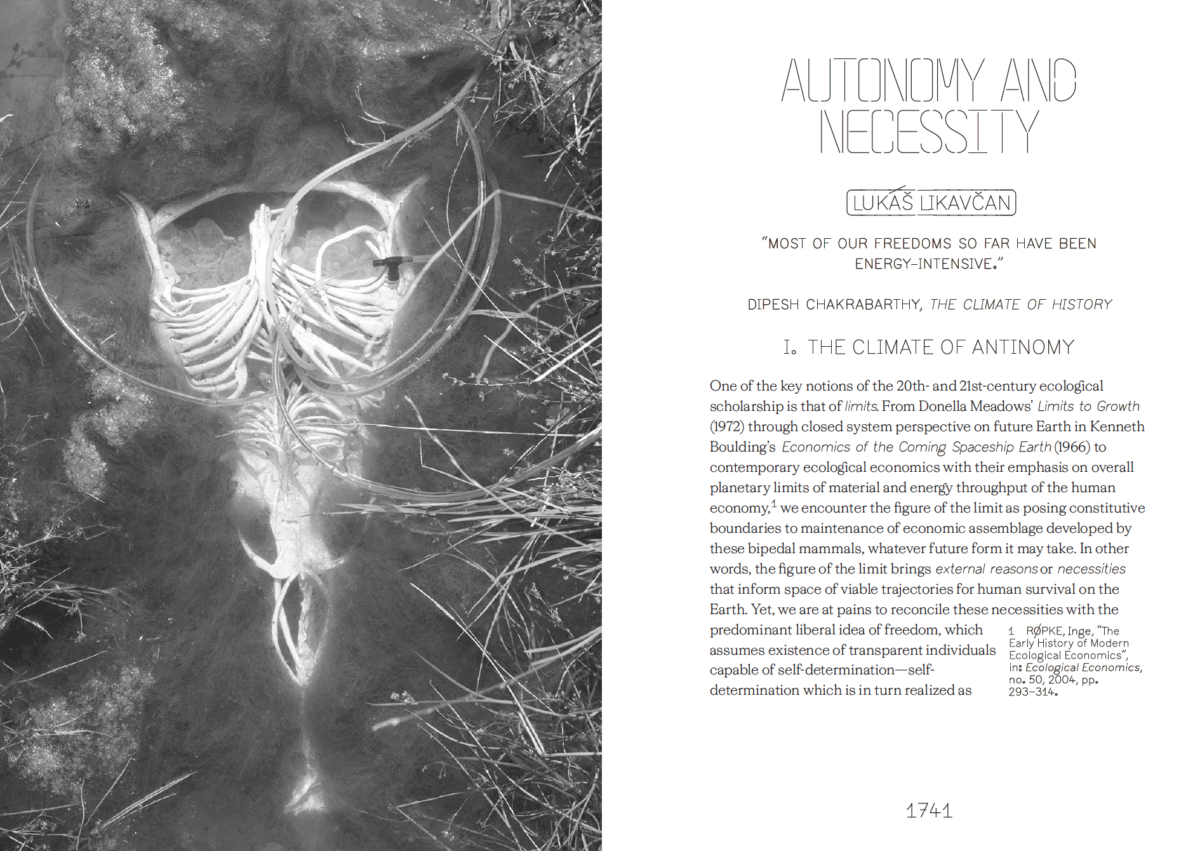 “[M]ost of our freedoms so far have been energy-intensive.”

– Dipesh Chakrabarthy, The Climate of History

I. The climate of antinomy

One of the key notions of the 20th- and 21st-century ecological scholarship is that of limits. From Donella Meadows’ Limits to Growth (1972) through closed system perspective on future Earth in Kenneth Boulding’s Economics of the Coming Spaceship Earth (1966) to contemporary ecological economics with their emphasis on overall planetary limits of material and energy throughput of the human economy,@@1 we encounter the figure of the limit as posing constitutive boundaries to maintenance of economic assemblage developed by these bipedal mammals, whatever future form it may take. In other words, the figure of the limit brings external reasons or necessities that inform space of viable trajectories for human survival on the Earth. Yet, we are at pains to reconcile these necessities with the predominant liberal idea of freedom, which assumes existence of transparent individuals capable of self-determination—self-determination which is in turn realized as a historical process. At times, we oscillate between harsh militaristic imaginaries of future war-like economies that climate crisis might lead to, and images of a pristine retreat to local economies, ranging from degrowth or solarpunk on the Left to protectionism and eco-fascism of blood and soil on the Right.

Climate emergency thus heralds the return of the scene of external necessities that has been historically supressed in 20thcentury, sometimes called the age of “Great Acceleration”.@@2 This acceleration has been described by scholars such as John Bellamy Foster, and it is not my aim to repeat their arguments here.@@3 Suffice to say that what this acceleration reveals is a peculiar disjunction between self-realization of the human subject governed by its own internal reasons (that is an exercise of freedom in its liberal sense) and external reasons that temper down this movement of self-realization. To reconcile this grand disjunction, political ecology has tried to rewrite borders between nature (as the realm of external necessities) and culture (as a realm of self-realization governed by internal motifs)—be it Murray Bookchin’s concept of second nature@@4 or Bruno Latour’s actor-network theory.@@5 These attempts share a common trait of opposing what they find as a very basic presupposition of modernity: that is maintains a clear division between the realm of the natural and the cultural. Either by dialectical synthesis or horizontalization of hierarchical ontologies, they “hybridize” what was so far held in distinction.

In this essay, I take these attempts as a groundwork that stages a new philosophical dilemma we are familiar with from the history of modern Western thought, and which finds its paradigmatic formulation in Kant’s third antinomy of pure reason, the one between “causality according to law of nature” and “causality through freedom”.@@6 Kant rephrases here the problem we have just postulated—the (im)possibility to reconcile internal reasons with external limits, the dilemma articulated in climate emergency. As we know, the Kantian solution of this antinomy would be to split the powers of reason between two realms, holding both sides of antinomy true, but in different registers: while the thesis is operative in the phenomenal realm, the antithesis operates in the ideal realm. In the Kantian framework, it is the latter realm that would be the site of the unfolding climate emergency.

However, this ontological delamination of reason’s competences rehearses the nature–culture dichotomy thoroughly criticized in contemporary environmental thinking. For this reason, it seems that we need either to devise another pre-emptive manoeuvre that would prevent the collapse of internal and external necessities into one domain, or to abandon one term in favour of another. The Western liberal mind will surely tend to sacrifice everything to save the pure realm of internal necessities—the causality through freedom—to guarantee the subject’s capacity for self-determination. That might happen either by supporting the dichotomy of the internal and external (complementary to nature/culture dichotomy), or by denouncing exteriority in favour of interiority. I will proceed in the opposite direction, examining what is left of the subject’s power of self-determination under the full pressure of external necessities. In doing so, I will first sketch the ontological terrain of my inquiry by using the picture of metabolic multitude, and from that point I will follow the black feminist thinker Denise Ferreira da Silva in uncovering how fundamentally flawed are the basic philosophical coordinates from which the very idea of self-determination in modern thinking arises. The split between internal and external necessities will be re-interpreted on racial grounds, and mapped onto the environmental domain, leading to the final reconstruction of the notion of autonomy that opposes the liberal idea of freedom, since it is deduced from the scene of (external) necessities staged by climate emergency.