with poster design by The Rodina 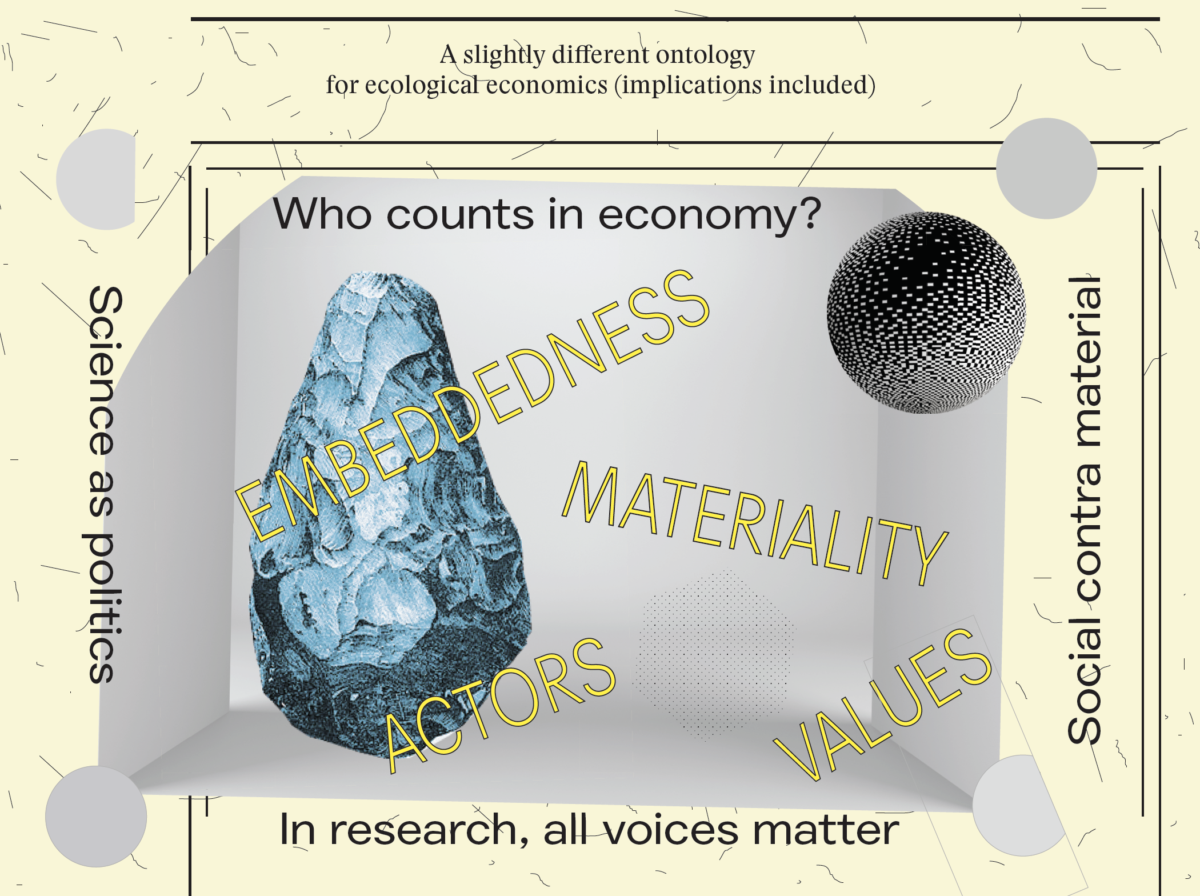 The notion of embeddedness of socioeconomic relations in natural environment is widespread in ecological economics. [3] [4] If we look at this concept from perspective of Actor-network-theory (ANT), we find out that it rests on a supposition of dualism between independently existing external, material reality and reality socially produced (and thus subject-relative).@@1 How to transcend this dual category towards more egalitarian ontology, one that does not draw sharp line between nature and society? What ecological economics can benefit from such an ontological shift?

Social reality is usually understood as an autonomous ontological region made up from some special – social – stuff, and driven by a set of distinct – social – forces. The nature of objects in such a realm is thus fundamentally different from physical, or material nature. Social is constructed in a net of intentional attitudes of human actors, in opposition to objective reality of biophysical interactions.@@2

When we talk about (social) actors, we usually mean individual human beings or groups of them. ANT proposes a more general vision. An actor can be any entity that associates with another in order to construct an assemblage. All actors are genuine parts of such structures and are usually simultaneously involved in multiple assemblages. It follows that objects we typically place to the environmental background of our socioeconomic activities are full-blooded social actors. What can be or can become an actor is not restricted to any particular set of entities. [8]

Who counts in economy?

In ecological economics, it is generally acknowledged that socioeconomic relationships are “embedded” in natural world. Based on this presumption, mainstream economic schools are criticised that the economic cycle does not see processes that happen in natural environment as relevant for production, supply, trade and consumption of commodities. [3][4] But in its notion of embeddedness ecological economics also fails to recognize that the social and the material are ontologically the same – not just two regions embedded one in another as Russian dolls called “matrioshka”.

Amongst socioeconomic processes are material, causal relationships between objects, situated in the one common world all these objects share together. The idea of materiality can be explained as the notion that social existence involves also material objects. [11] In our study of economic relationships, we usually suppose we are dealing with a distinct part of the world that has its own laws and functions according to the different principles of both dynamics and structuration than the material reality. [2] If what ecological economics strives to address is that in such a research, we are obliged to count with the ontologically same types of entities and their relations as e.g. biology or physics do, the implicit acceptance of material-social dualism is an obstacle to achieve a genuine alternative to the mainstream economics, for it rests on the same key ontological presupposition. What we call social (or economic) is not social (or economic) in essence – i.e. it is made up from a-social. [8]

In research, all voices matter

Ecological economics should be informed about pre-theoretic intuitions of socio-economic actors. It means that one of the ingredients of its methodology should be a careful attention to the narratives actors use to describe their actions and define their positions in particular circumstances.@@3 If these actors cannot inform us about these narratives directly (e.g. because they are not human beings), we should study the ways these actors determine the set of activities of other actors that are compatible with their persistence, i.e. their behavioural limitations (the properties that limit the ways we can relate to them). This second kind of study is principally the same as the first, for the uncovering of actors’ narratives also inform us about their behavioural limitations. The knowledge that is gained should be used to designate a range of proper socio-economic structures that can be imposed onto given assemblage of actors.

Latour describes the process of obtaining scientific knowledge as a sequence of procedures that carefully translate some observed phenomenon into its symbolic representation (a mathematical equation, a node on a graph, an element of figure etc.). These are in fact material practices, e.g. collecting the visual, audio or written records, physical samples, measuring certain properties etc. [7] But scientists do not only manipulate with objects in assemblages of actors, they also change them once they enter in for the purpose of their study. Moreover, scientists do not just deliberately enter into these structures, they are always already involved in some of them – scientific, cultural, national or ethnical communities etc. [8] It follows that ecological economics has to be seen as essentially socially engaged activity. The recognition of this inherent engagement should endorse their involvement into processes of policy-advising and policy-making, both on the local and global level, and both from the positions of social movements and political representations.

Ecological economics should be context-sensitive science providing what Arjun Appadurai calls the politics (or regimes) of values. [1][6] Values are created in action, so by their practice and behaviour, actors inform us about what is valuable and how to relate to it. From these data emerges a range of admissible socio-economic systems. And as far as ecological economists are social actors as any other scientists, they should endorse practices of achieving these systems by means of advising and performing the policies that lead towards their establishment, i.e. to engage in certain politics of values.

[1] Appadurai, A. (1986) Introduction: commodities and the politics of value. In Appadurai, A. (ed.) The Social life of Things: Commodities in Cultural Perspective. Cambridge: Cambridge University Press. pp. 3–63.

[6] Graeber, D. (2001) Toward An Anthropological Theory of Value: The False Coin of Our Own Dreams. New York: Palgrave.

[8] Latour, B. (2007) Reassembling the Social: An Introduction to Actor-network-theory. Oxford: Oxford University Press.